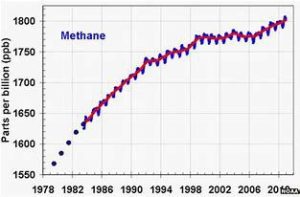 Methane is a strong absorbent of infrared (heat) radiation leaving the Earth’s atmosphere, and thus implicated in the ongoing global warming of our planet. After a lull in the 1990s, the concentration of methane in the atmosphere began rising rapidly in 2006. Methane levels hit an all-time high last year. Scientists are uncertain of the recent emissions of methane, which must be rising. Some believe that the increasing emissions are due to greater emissions from wetlands, both in the tropics and far northern latitudes. Others believe that the recent rise in methane in the atmosphere is due to the recent proliferation in the use of natural gas as a fuel and in the advent of hydraulic fracking to produce it.

It is worth examining these suggestions in a little detail, but bear with me as we pursue some chemistry. (I’ll try to make it simple). Methane is a molecule with four hydrogen atoms attached to one central carbon atom. The carbon in methane can have several isotopic forms, for example, carbon-12 or carbon-13, which has an extra neutron in its nucleus. Measured against a laboratory standard, methane in the atmosphere has an isotopic ratio (13C to 12C) of about -47 parts per thousand parts, abbreviated ‰, relative to the standard. Methane from natural gas has a higher ratio—about -20‰, whereas methane from wetlands is about -60‰. In recent years, the methane in the atmosphere has fallen from -47.2 to -47.4, implying that changes in the atmosphere must be due to increasing emissions from wetlands. Methane from natural gas would pull the ratio in the opposite direction.

Emissions of ethane are associated with natural gas, and the concentration of ethane was stable or falling in Earth’s atmosphere during the period when methane was relatively constant. In recent years, the concentration of ethane has started to increase, suggesting greater emissions of natural gas as the source of rising methane in Earth’s atmosphere—a conclusion opposite that derived from the isotopes.

Several recent studies have suggested that we have underestimated the emissions of methane from the production and global supply network for natural gas. But, as much as fracking is in the news, we cannot make the immediate leap that greater use of natural gas is now responsible for the current increase in methane in the atmosphere. First, even if the leakage from the natural gas supply chain has been underestimate by 40%, that does not mean that the emissions are now 40% greater than a few years ago—only that they are 40% greater than what we previously thought, based on erroneous measurements. Indeed, the flux from natural gas could be constant, albeit poorly estimated.

Something on the order of 1 to 2 percent of the natural gas produced in the United States is lost due to leakage from the production system. This may have increased in recent years, but we have no consistent and long-term standard measuring system to substantiate that belief. It is potentially equally possible that the recent rise in methane in Earth’s atmosphere is largely dominated by increased production from high latitude, permafrost soils that are now melting due to global warming.

The popularity of natural gas as a fossil fuel and its increased use are attractive candidates to explain the potential for increased leakage to the atmosphere. That makes sense to me, but the jury is still out on whether this is a cause of the current rise in methane concentrations.

State of the Union