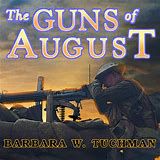 This is the first entry on this page that will be devoted to books, new and old, with announcements, new books and reviews. Book clubs that order through Merritt Books will each have entries so the world at large may know what the clubs are reading and what their members say or ask about their books. We invite discussion and comments.

This February’s book is Guns of August by Barbara Tuchman, a 1962 book about the opening month of WWI that has become a classic. Her flowing elegant prose and her historical good sense whereby she knows exactly how much to say but never too much makes for a well-organized, smooth read. The opening chapters methodically cover the geopolitical position of each of the main players: France, Austria, Russia, England, and Germany. The Austrian archduke, the heir presumptive to the Austrian-Hungarian Empire, has just been assassinated in Sarajevo, giving Austria an excuse to attack in the Balkans and subdue that bothersome collection of petty monarchies once and for all. That attack triggers a response from the Russians who side with the Slovaks and who look on the German speaking countries with distrust. Russia would like to conquer Poland and make it their own. France wants to get back at Germany to recover Alsace which it lost in the Franco-Prussian War of 1870, a humiliating defeat that needs to be revenged. Germany chafes under the slight that despite being defeated, France remains arrogant, a center of culture, a profitable colonizer in Africa and Asia, a celebrity in the worlds of fashion, music, opera, theater and art. Germany is jealous. And it wants to capture those areas just west of the Rhine where iron and coal can add to her industrial strength. England, smug in its empire, protected by the world’s largest navy and enjoying a shipping and trading advantage, has but a contingent interest on the continent via treaties that commit her to aid France if that country should be attacked.

Germany has been developing a plan of attack since 1892 (the Schlieffen Plan) that is updated, refined and calculated to subdue France’s armies in 39 days by envelopment, a thrust though Belgium and then south through Normandy. Germany has the best rail system in Europe, run by the army. It can move entire armies in days. By August 1917 the German armies are on the ready. They await an excuse to begin their attack on France. The Germans are aware that as a country in the middle of Europe they are faced with the dangers of war on two fronts. On the east they could be fighting Russia with its seemingly unlimited manpower, and in the west, they have neutral Belgium and a well-armed but somewhat disorganized France. Germany has developed huge siege guns that can destroy walls and fortifications.

This is the setting. We have a flurry of pointless diplomacy that never comes close to overcoming the momentum towards war. The Austrians attack, the Russians advance, the Germans roll into action. The Germans are shocked that the Belgians, who are supposed to be neutral, in fact have an army capable of slowing them down. A series of Belgian fortified towns and cities have to be attacked one by one. The big guns are brought up and the bombardment of towns and cities is begun with devastation showered on civilian populations that is reported in the world press. The Germans commit atrocities, burning and pillaging towns and cities. The world reacts. France will soon be attacked; the English are slow to react. The Germans arrive in northern France and the Battle of the Frontiers is on, but the Germans are no behind schedule. France attacked in the area of Alsace and Lorraine where it meets German armies. Before August is out the Germans have advanced to the Marne and are near the Seine. The French and the recently arrived British have retreated and things look so bleak that the French government is about to leave Paris for Bordeaux. One French general decides to counter attack seeing a flank opening, another hastily organizes reserves that gets transported by a fleet of Parisian taxis; the counter attack works and the German assault is repulsed. All this happens in August. The end of the book describes the beginning of a trench warfare that takes four more years and hundreds of thousands of lives.

We say: WWI was devastating. How could Germany do it again? How could the German leadership fail to see that victory is an illusion? That no one wins in war? Why did we need WW II? Tuchman says WWI made WWII inevitable, a conclusion buttressed by our study of the Peace Conference botched by President Woodrow Wilson who let his obsession of a League of Nations obscure the importance of nationalities in dividing up the collapsed empires – the Ottoman Empire and the Austrian-Hungarian Empire.

What else are we reading? A NYRB review (Oct. 19, 2019) mentions Vasily Grossman’s Life and Fate, his second book about the Battle of Stalingrad which history sees as the turning point of WWII. This decisive battle cost the Germans about one million men and a sizeable percentage of its air power, tanks and artillery. The battle was Hitler’s first setback. It gave Russia time to rebuild its army and made it impossible for Hitler to attack Britain. Life and Fate, like War and Peace, recounts episodes in connected lives as they engage in actual combat and as they live in their families and work places far from the front.

One episode recounts a mother who pines after her one son who is at the front. She travels to visit him in hospital where he undergoes a major surgery. When she arrives, he has just died. She finds his grave, a mound marked by a handwritten board surrounded by hundreds of mounds. There are stories about Jewish families and whole towns that are massacred by the invading Germans and then by Stalin’s own forces. All sense of humanity disappears. War and occupations are brutal, inhuman; fate determines who lives and who dies. Millions die. Millions are killed, murdered. It is bloodcurdling on an epic scale. Do we need this to know war is hell? To know that under both Hitler and Stalin mass murder occurred? That the victims were real people, not just statistics, but people who read books, wrote letters, had loves and friends, wrote poetry, made art, argued, were loyal and yet were killed.

Grossman lived through this period and had to write about it. He will be remembered as one who remembered. He wrote the first part of this book while Stalin lived; he finished in in 1960. It did not get published until 1988. Life and Fate is heavy in pathos, guilt, outrage, betrayal, fatalism. There is a sense of helplessness, but also of moral indignation. There is nothing anyone could do to stop it but there was a sense, there had to be a sense, that it was terribly wrong.

It is good to know just how bad man can be.

Demented by what we breathe