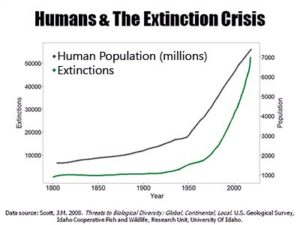 Over the past couple of centuries, we have witnessed a dramatic decline in wildlife populations (1, 2) and the extent of natural areas (3), with an increasing likelihood that many species will become extinct. Many scientists are predicting a global mass extinction that could rival the collapse of the dinosaurs roughly 65 million years ago. We know that biodiversity is a rich source of wealth, health, beauty, and happiness for people, and we should not allow it to vanish so easily.

Protecting old growth and restoring disturbed areas has never been more important if we hope to conserve Earth’s biodiversity. One unfortunate fact of the current human impact is that the world will not return to what it was, even if humans adopt a completely green economy. That moment has passed. Environmental conditions are shifting, atmospheric concentrations of greenhouse gases will remain altered for centuries, the composition of ecological communities is becoming homogenized, and ancient biogeographic barriers are being rendered meaningless. One outstanding consequence is that habitats are vanishing. How to save biodiversity that is losing its habitat?

As long as we cast our eyes to the past and measure success by what we have lost, everything will seem futile. I prefer to think of our future challenge as a “biodiversity bottleneck” and humans can emerge from the other end without losing substantial amounts of biodiversity. We will certainly determine the narrowness and extent of the bottleneck. Will it continue to constrict or can we reverse the trends? Given the pace of change, our ultimate fate will probably be determined in the next one hundred years or so. To look forward, we must envision a world where the human is, as George Marsh suggested more than a century ago, “a co-worker with nature in the reconstruction of the damaged fabric which the negligence and/or the wantonness of former lodgers has rendered untenantable.” (4)

Beyond protecting and restoring, we must also attempt to store a large portion of existing biodiversity in places like seed banks (5). Although plants are generally less endangered than animals, we might benefit by focusing conservation efforts on them, because they create habitats and form the basis of most ecosystems. Potentially, some of the seeds locked away now may hold the key for future adaptation in our important food, fiber, and other valuable plant resources. But simply locking them away is not sufficient. We must constantly test these banked resources to understand how they might respond to new emerging environmental conditions.

In addition to minimizing the impact of human activity, we should anticipate how to best enhance and strengthen Nature’s ability to adapt and evolve. Biodiversity and species richness, the two most common ways in which we measure Nature’s wealth, are determined by rates of extinction and speciation. Greater rates of extinction lead to declining biodiversity. One way to balance that decline is to accelerate speciation. But given the inherent unpredictability of the future, the purposeful design of species seems fraught with difficulty and peril. We need to enhance natural processes that can accelerate diversification and allow emerging habitats to select the winners. Novel genetic combinations created through extraordinary evolutionary pathways that fall outside of easy definitions of species and population dynamics have been increasingly associated with diversification events (6, 7) and are a major source of diversity in horticultural work.

Doubtless, given the tremendous challenges we face, radical action will be required. If we assume that the bottleneck can expand again in the relatively near future, one viable strategy would be the creation of metaphorical arks where biodiversity is captured, managed and explored, essentially domesticating biodiversity for a short period of time. Using the opportunities offered by gene flow between species and tissue grafting, we could create diversity “concentrates” in plants by maximizing genetic diversity amongst the fewest individuals possible. These few individuals could store genetic diversity and provide genetic bridges to future species. Once the forces constricting the bottleneck are relaxed, these concentrates could fill new emerging niches with newly adapting species.

Avoiding another great extinction will rely on innovative approaches to act as stop-gaps to biodiversity loss. The broad global shifts in resource use and per capita consumption must also occur to actually relax the constraints of the bottleneck.

A Music Lesson at The Stissing Center