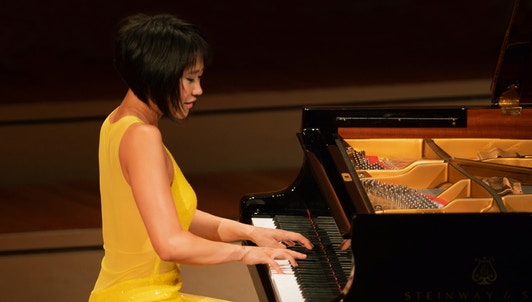 It’s rare that these two superstars play on succeeding weeks in the same city, but the fates gave us a treat. Yuja played to a packed house Friday, February 28 at Carnegie Hall and Daniil Tifonov played to a full house at Alice Tully Tuesday March 3, both making a page of history.

I can only give impressions, as I am not a qualified music critic. I stand outside that circle of professionals; I write as an interested amateur.

Yuja Wang departed from the traditional recital in more ways than one. First, she played 14 short pieces plus three encores. The program was silent as to the intermission timing, about which she would decide when she decided. Then she announced that she would play the pieces in whatever order she decided at the moment and not as listed in the program. Among the pieces were two unfamiliar names: Baldassare Galuppi and Frederic Mompou.

We barely recognized the Bach, a transcription of the Toccata in C minor, even though the fugues were blurred and the timing her own. She was giving us a new, 21st century version of pieces we should have recognized but didn’t. Three Chopin mazurkas, two Brahms intermezzos, two Scriabin sonatas, and a Berg sonata should have been easy to identify but they weren’t. Many in the audience debated which was which in a pleasantly confused state. The music washed over us like a deluge. We had not heard such music. It was original, fluent, overwhelming. It left us pleased, enriched, and altogether delighted. How she managed to accomplish this feat of extensive re-interpretation may as some time be explained. Meanwhile, I am happy to accept what she did as a new page in her personal history. She is looking for new challenges, new mountains to climb. She has shocked before and she is determined to do it again. One of my friends observed that she is an entertainer. That she is, but also a highly skilled musician with extraordinary talent.

Daniil Tifonov’s concert was all Bach: the Chaconne for left hand from Violin Partita No. 2 transcribed by Brahms, followed by the eleven parts of The Art of the Fugue played non-stop. This was one hour of piano played from memory. It was interpretation of a high order, personal, expressive, moving, introspective, intelligent, and satisfying. It was Bach modern, but classically so. I could imagine modern dance, the notes all dancers; I could imagine paintings, a DeKooning nude, a Picasso woman, a Barbara Hepworth structure, lines carefully drawn and intertwining making for a plastic construction. It was more than pleasing, it was deeply satisfying. The pace was controlled, slowed, but the tension remained. Each note was played with care, rounded, and full. The music was opened up and revealed. Such music could not be played on the instruments of Bach’s time.

Trifonov used the piano’s timber and range of dynamics to bring new insights and depth; this music was not Baroque, it was 21st century.Post intermission was the 12th and 13th sections of The Art of the Fugue followed by a classical rendition of “Jesu, Joy of Man’s Desiring” that was indeed full of joy.

These are truly great artists. Both have careers that take them to the major stages of the world in a continuing round of travel from one continent to the next, from city after city. Trifonov plays the same program March 4 in Washington, March 10, in St. Paul, March 12 in Kansas City, March 15 in Boston, March 22 in London, March 25 Hamburg, 26 Berlin, and the 28th in Vienna– eleven concerts in March. In April he is returns to New York to play Mozart with the NY Philharmonic.

In March Yuja Wang is booked for 14 concerts. She plays her recital in 11 cities and 7 countries; she will also be performing with the Berlin Philharmonic (Prokofiev’s fifth piano concerto) and two days later on the 26th, in Brescia, she plays an entirely different recital with clarinetist Anreas Ottensamer. Then she returns to the 11 works recital in Viscenza, Amsterdam and London, and on April 2, Vienna.

Going for Baroque with Aston Magna