Hot town, summer in the city 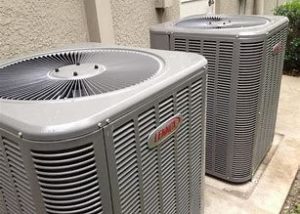 Back of my neck getting dirty and gritty
The Lovin’ Spoonful, 1966

The feedback loop will be exacerbated in urban areas, which typically show a “heat island” effect—that is, warming in excess of what is seen in the surrounding countryside as a result of the vast extent of pavement in urban areas that absorbs incoming solar radiation. With most of the world’s population growth destined for cities, the demand for air conditioning will increase disproportionately.

Are there alternatives? Yes, trees are natural agents of cooling, inasmuch as they take up water from the soil and evaporate—transpire—it from leaf surfaces. Each gram of water converted from liquid to vapor carries away what is known as the latent heat of vaporization, about 533 calories or 2230 kilojoules of energy. It doesn’t take more than a quick trip between the city center and a surrounding suburban area to notice that the atmosphere is cooler when trees are present. The ground in most urban areas is paved, so rainfall runs off quickly, but when soils are permeable, rainwater infiltrates, refills the soil pore space, and provides a reservoir that trees can tap for transpiration. Meanwhile, trees also take up carbon dioxide from the atmosphere and store it in cellulose.

All this speaks to the importance of planting trees in urban areas to lower ambient temperatures and reduce the need for air conditioning. Urban renewal by planting trees in Shanghai reduced the average temperature by 0.58o C (about 1o F) between 2005 and 2016. Urban areas with trees are likely to show the greatest cooling in drier climates, where the rate of transpiration is greatest after rainfall. Cooling via the transpiration of trees is likely to be less effective in tropical climates, which normally have high humidity and lower rates of evaporation.

One recent paper, looking at nearly 100 cities in the United States found that 78% of city dwellers live in neighborhoods with less than 20% tree cover. It suggests that widespread program of tree planting in urban areas might save at least $21 per person in reduced costs for health care and electricity. The total savings for the U.S. would range from $5.3 to $12.1 billion.

Where it is used, air conditioning is responsible for a decline in heat-related mortality and increased work-place productivity. If we can achieve the same result using trees, we can step off the vicious circle of global warming associated with increased use of fossil fuels for air conditioning.

Davis, L., and P. Gertler. 2015. Contribution of air conditioning adoption to future energy use under global warming. Proceedings of the National Academy of Sciences 112: 5962-5967

One toke over the line sweet Jesus